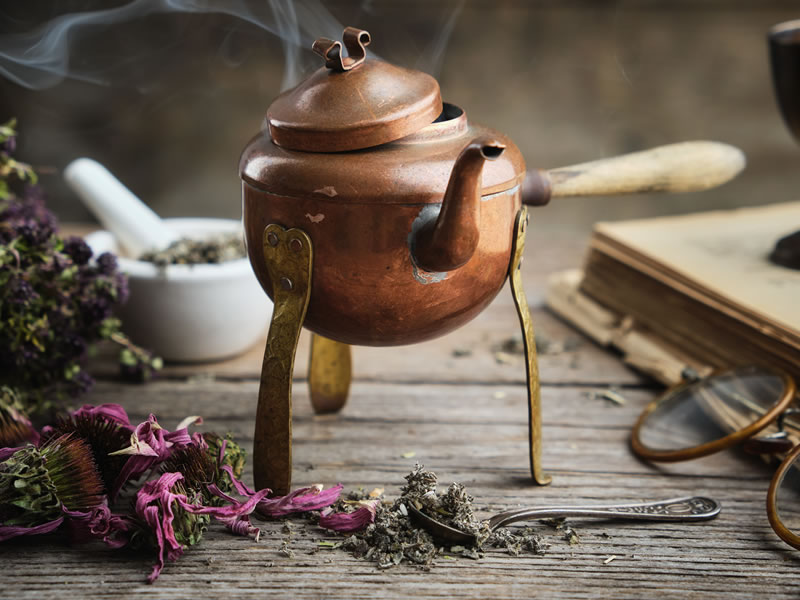 It may come as a surprise to many advocates of British tea drinking society but tea actually arrived in France some 22 years before the arrival on our shores. A renowned French letter writer, Madame de Sévigné, wrote in a monthly newsletter called TeaMuse that having arrived in Paris in 1636, tea quickly became very popular among the noble classes. It is somewhat more surprising to find that the British were one of the last European countries to try tea.

“Legend suggests that tea was discovered by chance”

The discovery of tea

As with so many important discoveries (and we do feel that tea is important), tea was discovered by accident over 5,000 years ago.

According to legend, Shennong, one of the renowned Three Emperors of ancient China, was banished to the south of the country after being overthrown. In a state of poverty he was forced to drink hot water and legend states that one day a gust of wind blew leaves from a nearby tree into his pot of boiling water.

The result was so relaxing that it is said that he did nothing else for a whole seven years but sit under the same tree drinking hot tea. He named it Tai (peace) and the first tea drinker had arrived.

The Chinese have drank tea for thousands of years, which is why the legend of its discovery originates here. It was commonly used as medicine and there are some records of tea consumption which even pre-date the Emperor Shen Nung. The first known book on tea, written by Wang Bao in 59 BC, is complete with instructions on how to buy, prepare, and more importantly, drink tea.

“China has the earliest records of drinking tea”

A more renowned text on tea was written by Lu Yu around 770 AD and is considered one of the most important books in the history of tea. Whilst residing on the Houmen mountain he would regularly brew tea for his master and built up an incredible knowledge of tea, herbs and the medicinal benefits they brought.

It was the Dutch who introduced tea to Europe as far back as 1606 when Dutch ships brought Japanese green tea back to Amsterdam. It was the Dutch who controlled the tea trade for fifty years as the major trading nation in Europe. It was the wife of King Charles II, a Portugese lady by the name of Catharina of Braganza, who introduced tea to the English nobility. Tea was still a luxury and remained a pasttime of the rich but demand was increasing steadily for this new drink on the British shores.

England began to trade tea with China with the East Indian Company which had firm roots with trade in the Far East. The Chinese had very strict rules for the export of tea and as foreigners were not allowed access to China itself, all trade took place in the town of Canton. The tea was expensive and was limited in supply. As a result, English traders began to trade Indian opium for tea and the widespread addiction in China led to the Opium War of 1839-1842. The Chinese tea monopoly was eventually broken and their ports opened to the tea trade. Supply was vastly increased and tea became immediately affordable to most in England.

Before long, the working classes of England would start the day with a cup of tea rather than the traditional jug of beer.

We will be adding a second part to the history of tea very soon. We will explore the origins of afternoon tea among the English nobility and how it came to be so popular today.