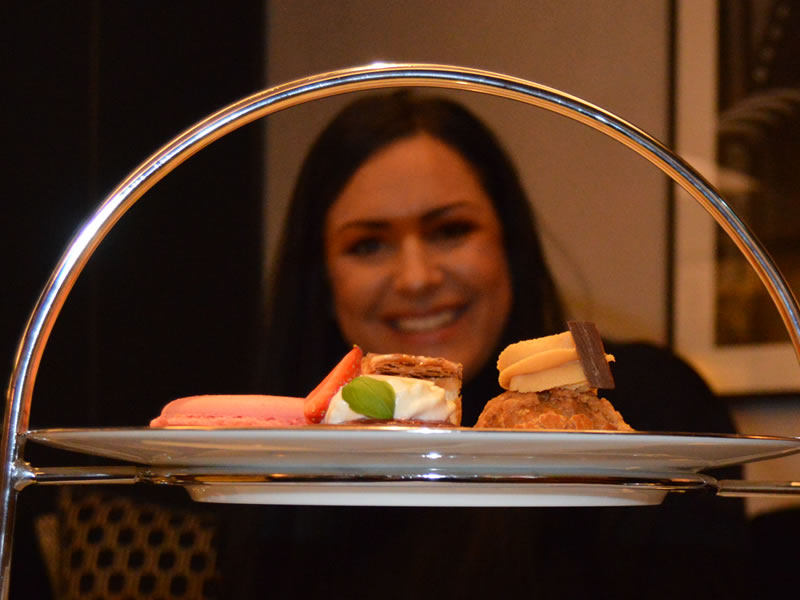 The award winning Athenaeum Hotel has an excellent reputation for one of the best afternoon teas in London. As a former winner of the Top London Afternoon at the Tea Guild Awards, the afternoonteaonline team were licking their lips in anticipation when invited along to try the new range of menus. The restaurant is overseen by the Michelin-starred London chefs Chris and Jeff Galvin.

Galvin at the Athenaeum Hotel & Residences is situated between Green Park and Hyde Park Corner underground stations. We took the tube to Green Park and alighted on Piccadilly where you always feel something is happening. There’s a great buzz along Piccadilly and not as busy as Oxford Street so you can take a much calmer stroll. It’s about a five minute walk from the station and you’ll arrive at the main entrance. We were greeted by a charming gentleman sporting a straw boater hat and he set the tone for our visit.

The hotel has recently undergone a major refurbishment, a multi-million-pound one at that, and looks every inch the five star hotel you’d expect. There’s a cosmopolitan feel inside with guests from all corners of the globe making the Athenaeum home for their London stay. We were welcomed and shown to the bar lounge where we sat in comfort on one of the sofas.

Our host for the afternoon was the delightful Marianne. She explained how the menu worked and offered us a glass of Champagne, always a great way to start an afternoon tea. I opted for the Lanson Père et Fils Brut, NV whilst Sara went for the Lanson Rosé, NV. Both were served in beautiful crystal glasses and went down well whilst we browsed the menus. There’s a good choice of afternoon tea menus at the Athenaeum. There is the traditional Classic Afternoon Tea alongside the Royal Afternoon Tea. You can also indulge in a more savoury affair with the Gentleman’s Afternoon Tea. After much deliberation we chose one each of the Classic and Royal teas to compare the menus.

There is an excellent selection of artisan teas to accompany your meal. I opted for the decaffinated Gunpowder Green, a light green tea that was once as popular as black tea is now. This classic Chinese tea takes its name from the way the tea is rolled into tight pellets, resembling those of gunpowder. Sara tried the Darjeeling First Flush, so named because these leaves are the first ones harvested in early February. Both teas arrived in solid silver teapots, something we both love!

And so to the afternoon teas! We hadn’t notified the hotel in advance that I am vegetarian (naughty), but this wasn’t a problem at all. The Athenaeum cater for a good range of diets, including gluten and dairy free. We’d recommend that you do contact the hotel before your visit for the latter though. It’s good to see afternoon tea menus varied to suit different diets. Having been vegetarian for 30 years, gone are the days of being lucky to get even a vegetarian lasagne!

The selection of sandwiches is really good. There are three perfectly cut finger sandwiches alongside a brioche roll. The Royal Afternoon Tea starred a delicious Crayfish roll which really was superb. Marianne let us know that refills are available but with so much to try, we looked forward to the pastries. Different menus, different pastries! No lazy selections here! This really is a pudding lover’s heaven. The Classic tea features a large raspberry macaron, delightful! We could easily eat six of those. The Royal tea features Scottish shortbread, strawberry Eton mess, raspberry jam tart, fairy cakes with butter cream and a coconut macaroon. So much to savour but we can happily say that the secret is in the taste. You can see that attention has been paid to the creation of a menu that does more than just look good. The tastes and flavours on offer are superb and we certainly recommend you try for yourself.

But wait, there’s more! Make sure you save a little space for the cakes, the encore after the main afternoon tea. There’s a Victoria sponge, Battenberg and a Cherry Bakewell to try. All delightful and although we couldn’t quite finish off everything, Kristina was happy to give us a little goodie bag to take home.

Afternoon tea at the Athenaeum Hotel in Mayfair is a must-try. The service is fabulous and the food tastes exceptional. The next time you’re in London, make a point of strolling down Piccadilly to the 5 star Athenaeum and spending a few hours enjoying afternoon tea.